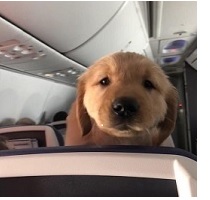 UPDATE: December, 2020 - The Department of Transportation has issued its final ruling regarding an amendment to the Airline Carrier Access Act which will be affective on January 4, 2021. There are many provisions included in this amendment; however, the main one is the change in the definition of a service animal. The amendment defines a service animal as a dog, regardless of breed, that is individually trained or able to provide assistance to a qualified person with a disability. This amendment actually allows the airlines to adhere to this definition or to continue to accept emotional support animals. More details here

UPDATE January, 2020: The Department of Transportation has issued a Notice of Proposed Rulemaking and is collecting comments regarding changes to the Airline Carrier Access Act (ACAA). The changes proposed in this amendment is aligning the definition of a service animal to that of the Department of Justice's Americans with Disabilities Act (ADA). The ADA defines a service animal as a dog that is "individually trained to do work or perform tasks for the benefit of a qualified individual with a disability, including a physical, sensory, psychiatric, intellectual, or other mental disability. Should this amendment pass, all other animals will not be offered protection under the ACAA.

The comment period will be for 60 days. Further updates to come.

Most importantly, the DOT will allow the airlines to request documentation regarding the need for and the training of emotional support animals prior to departure of the flight. Airline procedures regarding confirmation of this documentation will remain in effect.

The full DOT finding can be found by clicking here.